So even though there was more snow projected locally, we figured why not go on a road trip? As it was dumping snow we packed the car and skipped town around 8:30pm. Our goal was to reach Jay Peak, normally a 3.5 hour drive. By the time we were getting close to Sunday River, usually about an hour from where we had started in Farmington, we were debating whether or not to pull in and cut our losses. The streets were barely plowed and the snow was coming down so hard visibility was near 0. But, we kept on going and Ross’s jeep cherokee, with a 6 inch lift and somewhere around 32" tires took it on like a champ. We had packed tents, but when we finally arrived at Jay Peak around 3am no one had the energy to set them up in the howling blizzard. So after a failed attempt at acquiring a free hotel room from the guy at the front desk, we started looking for any old place to throw down a sleeping bag. Much to our surprise, one of the lodges was unlocked! We pitched our air mattress and called it a night, debating the legality of what we were doing. We later awoke to some friendly lodge staff who seemed to take no surprise to our being there which led me to believe we weren’t the first.

We started the day off by riding the highest lift we could, and from there we hiked because the tram wasn’t running. We spent the entire time lapping the upper half of the mountain by foot, and it was SICK! I can honestly say, my first consecutive set of turns resulting in a face shot every time happened on this day. It was unreal.

Ross and Alden comfy in the lodge. 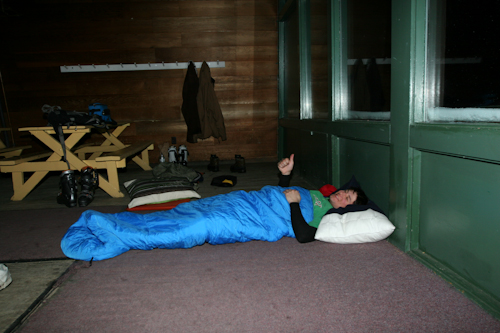 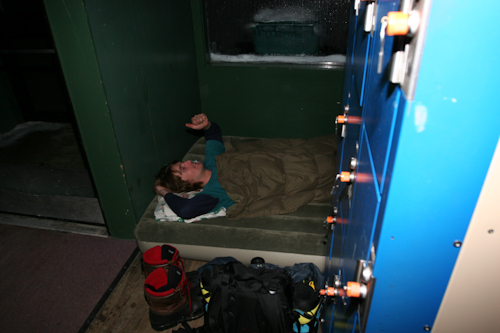 And finally, some face shots 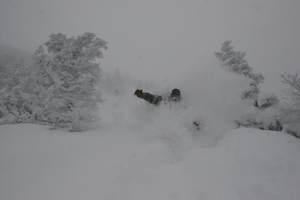